Mrs Jarrett and her daughter came to More Ability having been highly recommended as the company who could solve their bathing problem. An existing shower room that featured a shower enclosure whereby the step in to the tray was far too high meant an un-safe struggle when climbing in and out. With a natural alcove and subsequent bulk head the room posed design problems of its own when looking to create a safer and more accessible showering solution.

Meeting both Mrs Jarrett and her daughter on site More Ability Surveyor & Designer, Garry, soon addressed the main aims of the adaptation project. Wanting to keep the existing bank of semi-recessed fitted furniture in situ while transforming the shower room with least disruption as possible, Garry had the task of designing a level access wet room that allowed for as much showering space as possible.

A bespoke design that used the natural available space to create a larger than life, purpose built, showering area meant the once unsafe and unmanageable shower room was transformed into safe and accessible wet room.

Keeping the existing run of fitted furniture the WC was replaced with a raised height comfort pan for ease of use. Similarly the customers requested that there existing tiles, where possible, were also untouched meaning complimentary wall board was sourced and installed to the new shower area with slip resistant vinyl applied to the floor. 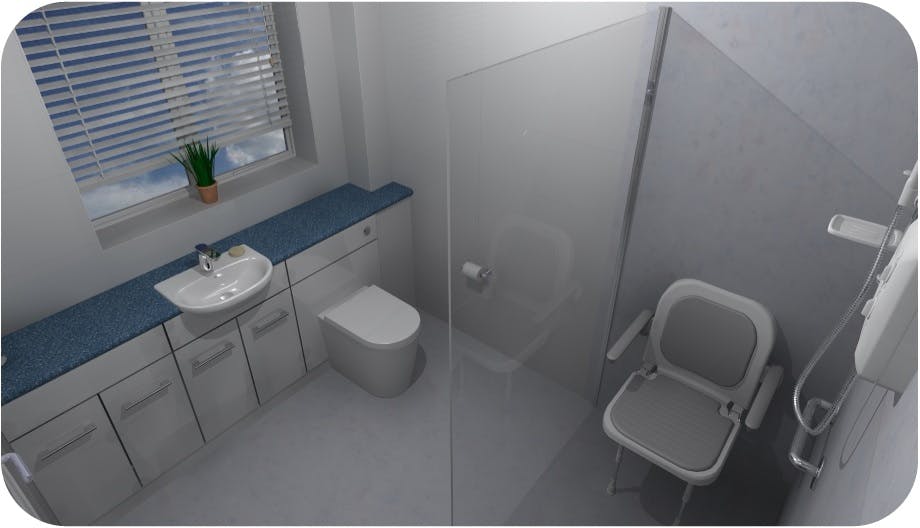 “Mums had her first shower and everything's fab - perfect opportunity to feedback how great Chris the fitter was.”