Know what you’re looking for? Use our article filter. 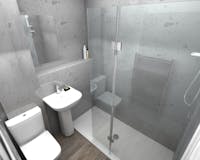 A dated bathroom was transformed into a low maintenance accessible walk-in shower room with modern fixtures and fittings.