Bathroom design – what have the last 50 years brought us?

This year, Leeds-based home improvement specialist Passmore Group celebrates 50 years in business. A lot has happened in that half a century, throughout the region, the country and to the organisation itself. But how exactly has the world of bathroom design evolved? In this exclusive interview with The Yorkshire Times, we look back at some of the standout trends from the last 50 years, before considering what’s next for this important room in our homes.

In his role at the helm of Passmore Group – a family business born and bred in Leeds – it’s perhaps no surprise that Tony Passmore knows a lot about bathrooms. Not only has he witnessed first-hand how tastes and specifications have changed over the years; he’s also played a hands-on role in designing and delivering ‘dream’ bathrooms – including easy access bathrooms for the elderly and infirm – to customers throughout the region.

But rewind to 1965, when the company’s story first began in the shape of a two-strong plumbing business based in Beeston, and the bathroom was not necessarily a homeowner’s pride and joy, like it is today.

“Fifty years ago, when my mother and father started the business, bathrooms were a very functional part of the house. Seen purely as somewhere to cleanse the body, time spent in them was minimal. At that time, there were still some homes in the region that didn’t even have an inside toilet! Properties that did feature an indoor WC, wash basin and bath tub – but rarely a shower – were certainly the ‘posher’ of residences in Leeds and the surrounding areas.

“Passmore’s first invoice, for example, was for a primrose bathroom suite with tiling. Considered the height of luxury at the time, this set the customer back a fairly significant £111 6s 6d.”

But over time, the novelty for the rich became a necessity for busy families, which saw the opening of Passmore’s Leeds-based bathroom showroom in 1970.

“As bathrooms were cemented as a household ‘norm’, demand gradually grew for an element of choice. Design, at the time, revolved around functional bathroom equipment with no real element of design. Throughout the 70s we saw the injection of colour, with suites available initially in primrose yellow, sky blue and pink before evolving later in the decade into an array of dark browns, blues, greens, yellows and reds. And showers slowly became more commonplace in the latter years of that decade, given their exemption from VAT. The Government wanted more homes to have them, so the purchase was incentivised.”

Tony recounts that, whilst little changed in terms of the conventional appliances and sanitary-ware that people would opt for in their homes, the colour theme moved to pastels in the 80s. “Pastel pinks, creams and greys were the fashion at this stage,” he explains. “We began to see an increasing number of households gradually use the colour of their suites as an expression of style.

“This was the only element of variety really. When I joined the business in 1981, bathrooms typically still contained a straightforward bath and pedestal wash basin – each with a plain pair of taps; a standard toilet; traditional radiator; central light; walls part-covered with 6 x 6 inch tiles; and either linoleum or carpet on the floor. More extravagant bathrooms would have a shower over the bath, and a shower curtain.”

In the decade that followed, there was gradual increased investment in smaller bathroom appliances, with people thinking about how best to use their space. Tiling choices became more varied, recessed down lighting was introduced, and ‘his and hers’ bathroom zones slowly started to emerge. By the mid to late 90s, virtually all installations had returned to white appliances only, and showers of some description were viewed as something of a necessity.

But perhaps the biggest movement in bathroom design came around the early part of the millennium, as Tony continues.

“The advent of the internet brought a potential source of vast inspiration,” he said. “Consumers could now search for design ideas and aspirations, and because the hunt for suppliers would never again be limited purely to the local area, pricing became more competitive.

“Over the next 10 years or so, as homeowners were flooded with choice, bathrooms started to be viewed not just as a room dedicated to personal hygiene and grooming, but one for relaxation too. Even relatively standard bathrooms began to have a sense of sanctuary about them.

“As we moved towards the present day, consumers found they could enjoy larger bathtubs, floating appliances, spacious power showers and indulgent technology such as spa jets and even steam rooms, for a comparatively lower investment to previous years.

“This has gone some way to explaining why, in 2015, bathrooms are seen as a way to add value to the home. Indeed the quality of a bathroom finish, especially one with the ‘wow factor’ – can greatly influence sales of properties when put on the market. And of course there is the added attraction of en-suites now, incorporated seemingly as standard within new builds.”

There are also fewer design limitations now, confirms Tony, regardless of the type of homeowner. “It’s important to remember that we’re generally all living longer. So, as people approach the more elderly years of their lives, often with some disposable income capacity, they are increasingly looking for safe, easy access bathroom solutions that don’t compromise on style. Non-slip showers, adapted baths and ergonomic taps are just some of the things that can make bathing easier when our health starts to deteriorate. Wet room showers represent something of a future-proofed option too, so they are currently also very popular for people in this part of their lives. And all of these solutions can still be beautiful.” 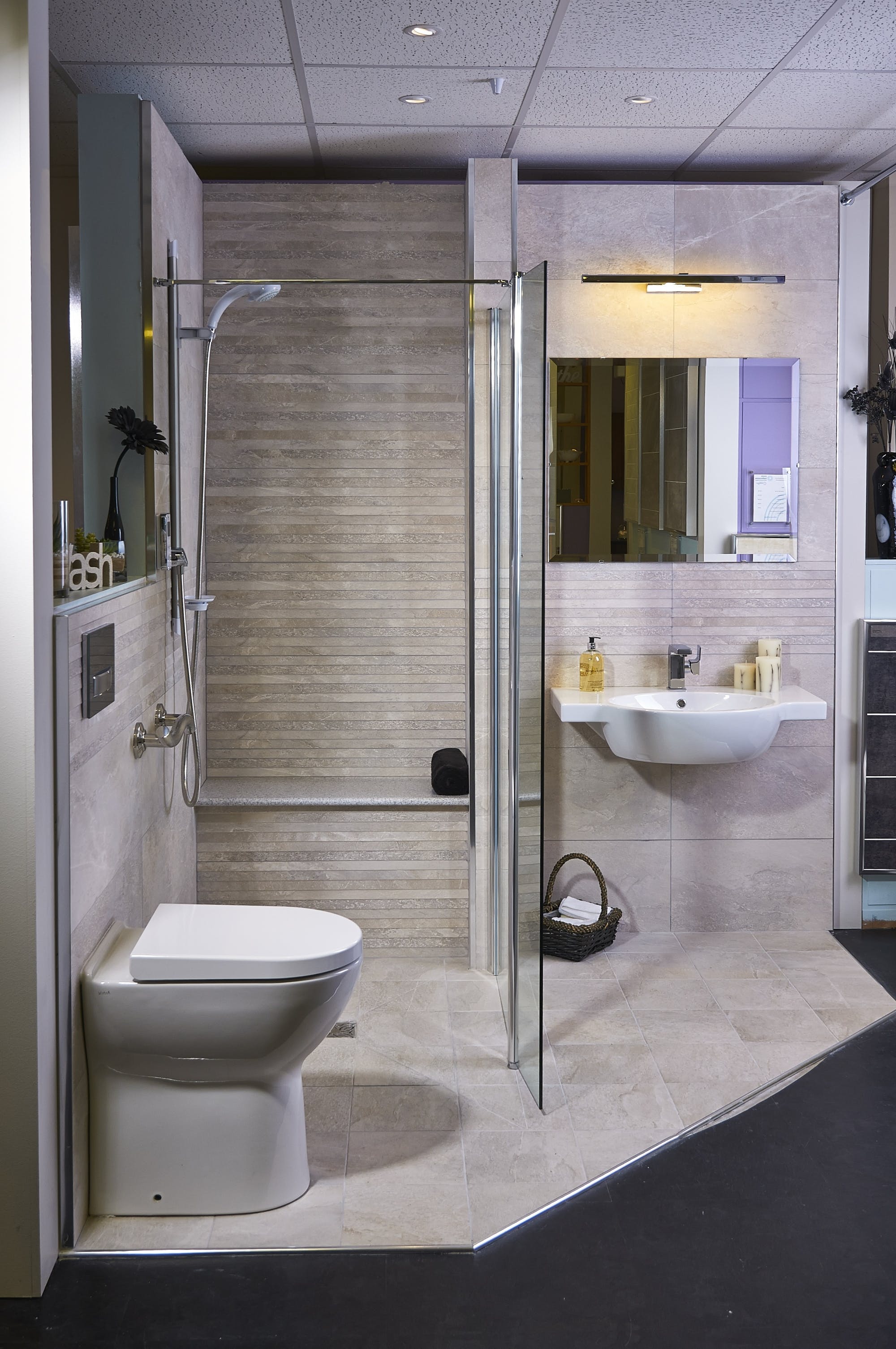 So, the all-important question for Tony now is what does the future hold for bathroom design? Will we see a return to coloured suites? Is the sense of sanctuary here to stay? And is the element of variety simply too overwhelming?

“If you visit a bathroom showroom or website in the present day, there is a lot of choice,” he believes. “But the differences in equipment are, in truth, only slight. Design and brand tend to be the key drivers. 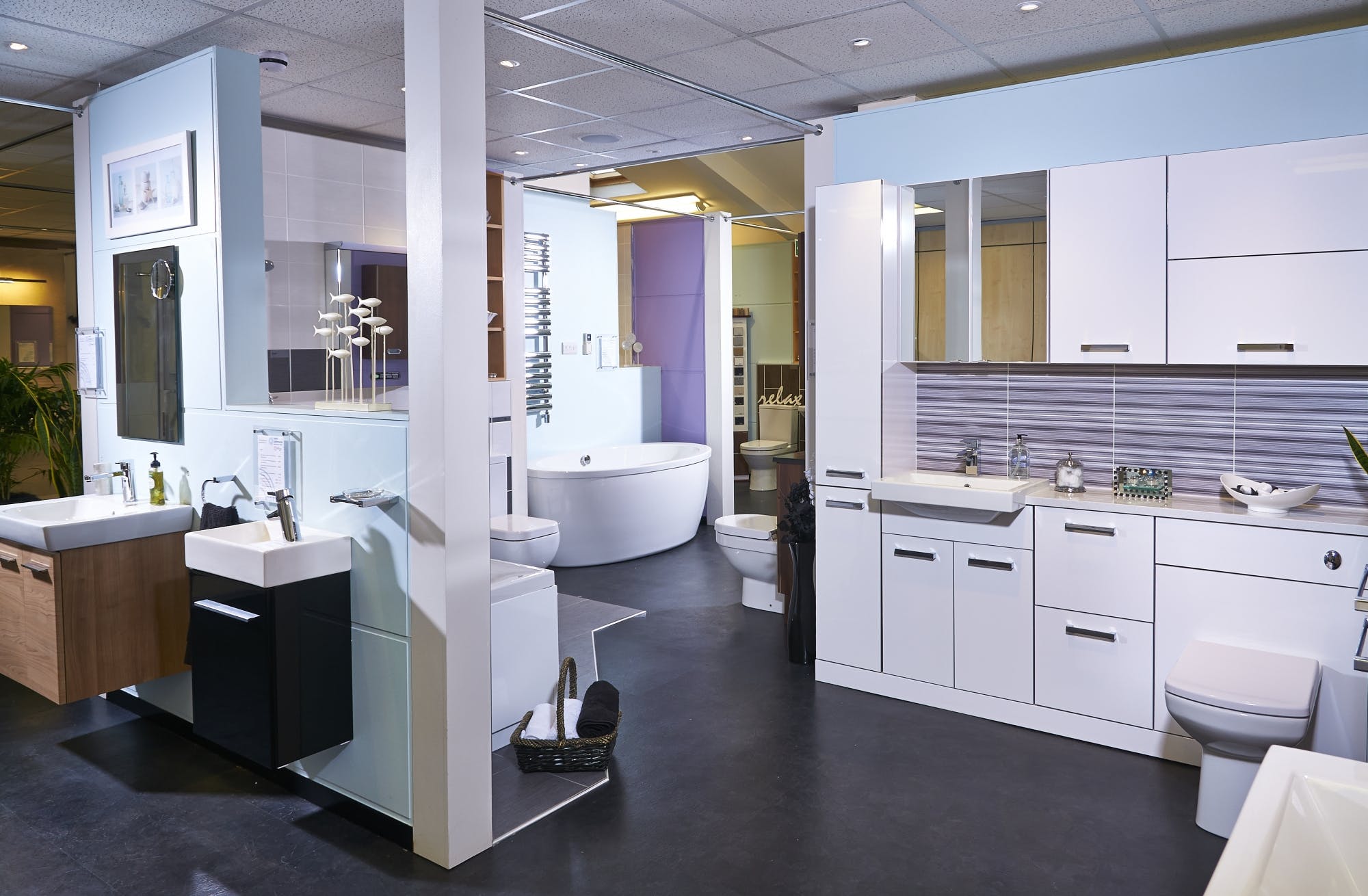 “So, for as long as prices remain affordable, there will be a growing tendency to design bathroom solutions that feel bespoke to the household they’re going to be introduced to.

“CAD technology, which has become the norm for forward-thinking bathroom companies in the last 4-5 years, will allow homeowners to achieve this. The look, feel and practicality of a bathroom space has to suit the lifestyle of the user or family, so conceptualisation and visualisation is key. I believe this is difficult to achieve by surfing the internet, so an element of expertise and experience is important. Otherwise, the scope of choice could feel too much!

“A standard three piece suite as we know it, is becoming much rarer, with people increasingly hand-picking everything from the shape of their bath, to their taps, shower head and lighting, without breaking the bank. Even in the smallest of spaces, beautifully crafted furniture with in-built storage solutions will also remain popular. As the pace of life shows no sign of slowing, showers will undoubtedly continue to be our daily cleansing preference, whilst baths will be used when we need a little more solace.

“The sense of ‘art’ that can be achieved with the ever-growing number of tile designs and materials means the importance of colour and personalisation will remain, although thankfully I don’t see us veering away from white appliances any time soon!

“We’ll see more and more technology introduced into bathrooms, with TV screens and audio speakers already becoming sought-after by many. However I’d hope the UK’s growing commitment to the environment will heighten the implementation of components such as energy-efficient lighting, insulated floors, water-saving toilet flushers and shower trays made from recycled materials.

““The continued airing of DIY programmes on TV will keep striking bathroom designs at the forefront of people’s minds. But it’s important to remember that bathroom overhauls aren’t as easy to plan, design, install and project manage, as some of these shows make out. If they were, a company like ours wouldn’t have been around for as long as it has!”

Like any aspirational purchase, bathrooms will always be dictated by fashion it seems, which goes some way to explaining why the market is unrecognisable from what it was half a century ago. With this room in the house typically being transformed every 10-15 years, there’s certainly food for thought for the next makeover.