Mr & Mrs Wetherill had a relatively small 3 piece bathroom that housed an over bath shower mixer, basin and back to wall close coupled toilet. It was half wall tilled and fully floor tiled but due to the colour of the wall tiles (black) this small room was made to feel even smaller.

Mr & Mrs Wetherill were a newly retired couple that had begun to struggle getting in and and out of the bath. The main problems that needed solving were to take out the bath and replace with a shower solution to facilitate ease of use & safety and, through design, make the most of the available space. 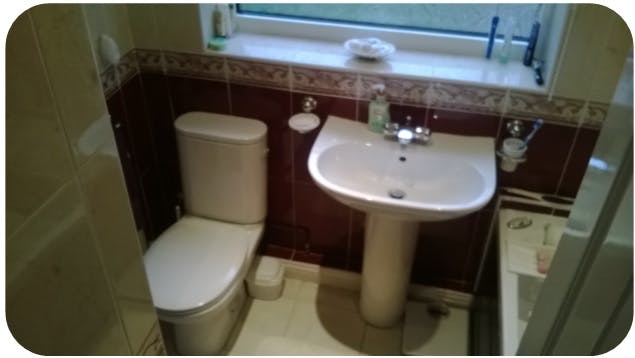 Paul Liddle, More Ability surveyor & designer, listened carefully to the couples request – it was already decided that the bath was to be replaced with a shower solution but which solution would be best for them and their needs remained a lingering question. Weighing up the pros and cons, and forming part of a joint discussion, it was decided a walk-in shower was the solution of choice with the shower tray fully replacing the existing bath.

Making the most of the available space Paul proposed a full wall vanity unit to sit behind the door which would house the basin & WC giving the couple great movement in the centre of the room but also ample storage to aid decluttering the space. Finally to further compliment the chosen fixtures, a light colour scheme was proposed to open up the room giving it a light and airy look and feel.

A great stylish shower solution for now which could be further adapted at a later date should it be required with the installation of a shower seat & grab rail. The room was opened up to incorporate a large walk-in shower to the right and ample storage in the form of a vanity unit, housing the basin & WC to the left. Mr & Mrs Wetherill were thrilled with the finished suite – commenting how amazed they were that safe could also mean stylish.

“We are thrilled with the finished bathroom to shower room conversion. The room feels 100 times bigger and we are amazed at how such a stylish suite can also be so safe. Thank you for all your help.”